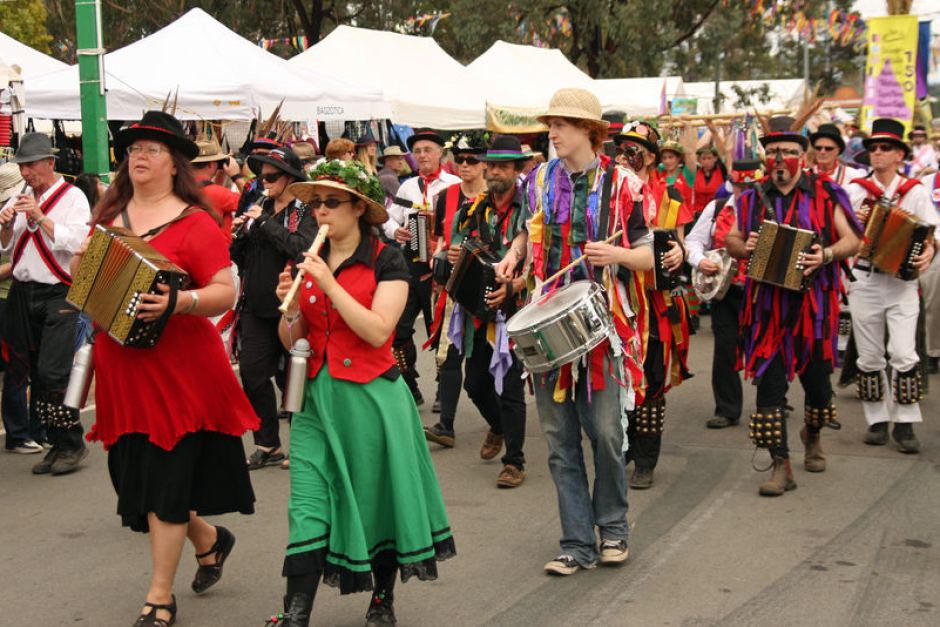 This Easter at the National Folk Festival in Canberra, I was very fortunate to catch Jeanette Wormald’s performance when she premiered her production Horizons and Heartlands. Jeanette comes from the northern Mallee district of South Australia where she and her husband Dean are grain farmers. Horizons and Heartlands aims to acquaint us with this area through words, music and a changing backdrop of associated porno gratis images.
Jeanette on her Mallee propertyJeanette has a warm, confident and engaging stage presence. She took us with her on a delightful hour-long journey of discovery. It was soon apparent that we were in the company of someone to whom the Mallee area is significant and very special. “The more open your heart and mind to it,” she explained, “the more you understand.” This sentiment was also expressed in her song To The Mallee Born, when she sang about a country that “takes your heart and soul”. But, she informed us, it is also a country that comes with certain responsibilities. Through the original songs featured in Horizons and Heartlands, Jeanette shared her love for the Mallee and how this area must be carefully maintained.

The upbeat song If This Ain’t Country effectively served to establish Jeanette’s credentials. Her thoughtful and clearly articulated comments between each song were enlightening. I felt as if this is what it would be like to walk with her through her beloved Mallee. Walking across a landscape is, in my opinion, the best way to learn and understand more about the area you are traversing. Jeanette obviously subscribes to a similar belief. In her song Acres of Blue she is walking.

“As I walk these limestone ranges
Seeking out your history
I can hear in distant whispers
Your ancient spirit speaks to me.”
The imagery in this song and others demonstrates the close relationship she has with the landscape. Her acute observation and willingness to listen have led her to a greater awareness and understanding of, as well as a deep respect for, her environment.

Despite indigenous inhabitants of her area no longer being present, Jeanette acknowledged in Horizons and Heartlands the importance of their presence in the history of the area. The sensitivity expressed in the song Walk With Me comes from her work with neighbouring indigenous people. Just as an understanding of the land can start with a walk, Jeanette uses this same idea metaphorically when it comes to learning from and about people.

The represented history of Australia has been male dominated up until recent years. This is also true when discussing farming practices. What makes Horizons and Heartlands so relevant and refreshing was the opportunity we were afforded to hear first hand from the experiences of a woman farmer who is also working in sustainable farming practices. The consequences of a woman expressing an opinion in what was traditionally considered a male domain was explored by Jeanette in the song Tall Poppies.

The festival production included a selection of nine of Jeanette’s songs. They were used to celebrate the Mallee, which in Jeanette’s own words, “is a magnificent, ancient living landscape that can teach us so much about this whole nation.” These songs were beautifully presented by Jeanette, whose warm, expressive vocals were a delight to hear. Besides her own sensitive guitar playing, she was assisted by John Bridgland’s tasteful guitar and mandolin accompaniment.